Finding Affinity in a Pandemic 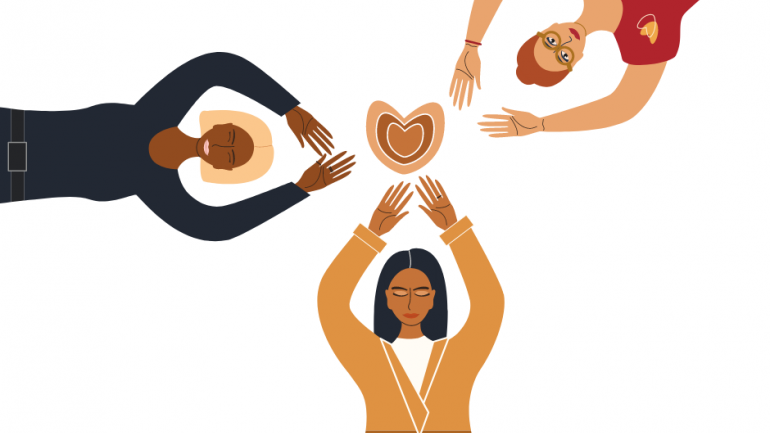 Student groups come and go on any high school campus, growing and shrinking as student interest dictates, and are generally fairly casual enterprises. In the midst of a global pandemic, however, these groups suddenly became one of the few ways students could socialize with peers outside of class, and at GHS in particular, online affinity groups became an important source of support and camaraderie for students and faculty alike.

“After a summer of seeing our kids living in isolation with the Black Lives Matter movement and a racial awakening happening on all of our doorsteps, we started to think very intentionally about ways we could support BIPOC and other students from marginalized communities to connect with each other,” said GHS Co-Principal Stephanie Khaziran. “We got all of our affinity group faculty advisors together before the start of the year, and talked about how this was really going to be something more significant than ‘just’ a student club while everything was still online.”

“As a faculty advisor (for APISU), it was important to me that we strike a balance between engaging kids in political solidarity work, and then just letting them exist and be their authentic selves,” said Caroline Mar, Learning Seminar Teacher. “And the other piece is representation: how do you make kids feel seen when you can’t actually be seen on campus? So we tried to do lots of small things, that maybe would seem superficial or minor to an outside observer, that were just designed to keep that presence alive, to show up for our BIPOC kids and say ‘this school is still for you.’”

But affinity groups aren’t just for kids! In fact, GHS’s 10 student groups are supported by and in some ways informed by the work taking place in five different faculty groups: The Ethnic Studies Circle and Ethnic Studies Curriculum and Instruction Group, which help frame and implement the formal Ethnic Studies education GHS students receive; the White Anti-Racist Teacher Group; the BIPOC Affinity Group; and the Equity Inventory Team, made up of representatives from the other groups and focused on larger, systemic issues.

“[The BIPOC Affinity Group] was the one meeting I didn’t miss all year, no matter what was going on,” said Aumornai Edinburgh, GHS Dean of Culture and Community. “Because I knew I needed a space where I could just be. And I loved how flexible it was: sometimes we were there to get work done together, or to reflect on our practice, or just to share something positive.”

As students and staff prepare to return to campus, the student and staff affinity groups are more robust and energized than many have been in several years. One area of focus that students are asking for across all groups? Opportunities to socialize and a focus on mental health.

“A lot of kids got a crash course in adulting this year, so for me it’s really important that we’re listening to what they want moving forward,” said Aumornai. “And if they’re excited about mental health and wanting to get more involved and develop workshops about those topics? We’re going to be supporting that, whatever they want it to look like.”